I am told that in the last week of April Plimoth Plantation quietly demolished the kiln we designed and built for (and with) them in 2001. The wood-fired replica of a 17th-century updraught kiln from Barnstaple in North Devon was built in June/July 2001. It has served well over the years and I have been back to fire it in 2006 and 2008. It was a great pleasure to work with everyone at the Plantation and we made many friends. The Plantation had an enviable record for research and experimentation both in the study of the past and in the presentation of it to the public. We were pleased to be a part of that.

The kiln was built in 2001 as part of a project to develop the facilities of the Craft Center at the Plantation and to extend the range of ways in which they could educate visitors to the museum about the crafts of the 17th-century. Crafts Center potter Debbie Mason was central to the project and commissioned David Dawson and I as specialists who could help them to construct an appropriate working replica of a period kiln. They already had the potters and the skills to make to pottery. The project had funding from the Massachusetts Foundation for the Humanities and involved a group of teachers from the Rising Tides Charter School in Plymouth as well as museum staff and members of Cape Cod Potters. The kiln was built on a plot opposite the Crafts Center under the watching eyes of visitors. It was closely based on a group of 17th-century kilns excavated in Barnstaple, N. Devon from where much pottery was exported to early English settlers in North America. We had worked with the excavators and designed and built reconstructions as part of the Bickley Ceramics Project. 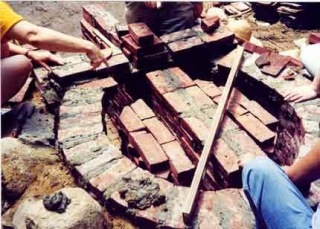 These are most of the team that built and made for the kiln in 2001. Kristen Peltonen, Michelle Cusolito, Marianne Malmstrom, Michael Burrey, Martha Sulya, Debbie Mason, Tim Lindstrom, Ginny Coburn, me, Nancy, x, Ben, Gillian Higley, David Dawson and Kayla.

The Craft Center is being completely refurbished and the outdoor area is to become an arena with raked seating for demonstrations and performances. Parts of the workshops are top become a bakery, or so I understand. More info on their website.

Like Loading...
This entry was posted in Archaeology, Bickley Ceramics Project, Experimental Archaeology, Kilns and Kiln-building. Bookmark the permalink.